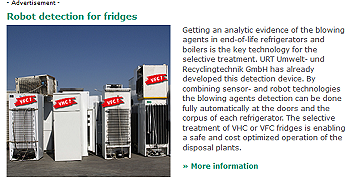 URT Umwelt- und Recyclingtechnik GmbH participated again with an own stand in E-SCRAP 2018 which took place in New Orleans from October 9th - 11th.


Electrical boilers are mainly isolated with polyurethane (PUR) foam. These foams are containing VHCs and VFCs.
These gases have been used as ...

On July 8th, 2018 a visit has taken place from (10) members of the CHINA ASSOCIATION OF CIRCULAR ECONOMY-WEEE COMMITTEE (CACE) at URT Karlstadt. ... 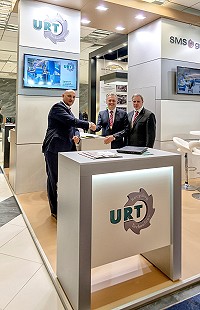 
In the course of the year 2018, the engineering company URT Umwelt- und Recyclingtechnik GmbH, which is based in Karlstadt, will deliver electronic scrap treatment plants to Russia. Deliveries will be made to three different locations. Two of the locations are situated on the periphery of Moscow. There, primary treatment of end-of-life household appliances will take place. The treatment plants are designed for household appliances such as refrigerators, kitchen appliances and office communication equipment and will process 75,000 tons of electronic scrap per year. This would correspond to an amount of about 4 kg per inhabitant of Moscow. In Germany, for example, 7.6 kg of electronic scrap have been collected per inhabitant and year in 2017.

At the other two further locations in Russia, the output fractions from the primary treatment plant will be further processed. For example, the mixed plastics are sorted and purified by type of plastic. An extrusion line is used to produce high-quality re-granulates, which can then be used directly for the production of new devices.

At the plant site, which is about 350 km away from Moscow, printed circuit boards and copper cables will be treated. Especially the circuit boards from end-of-life electrical appliances are especially valuable. By means of a mechanical treatment and the subsequent metallurgical processes, copper, gold, silver and palladium can be recovered.

For URT Umwelt- und Recyclingtechnik GmbH the value of the deliveries amounts to approx. € 17 Mio. However, for being able to deliver to Russia at all, URT had to obtain extensive permits from the Federal Office of Economics and Export Control. In the meantime, all permits have been issued and deliveries can be foreseen as scheduled. 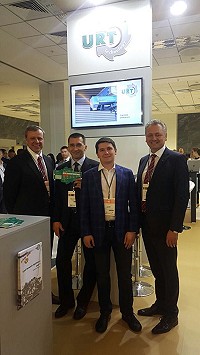 The main topics of the congress are :

Implementation and solutions of the Eco Fee, WEEE situation in the EAEU, legislation and standards, best available technologies for recycling, collecting and win valuables and build up the market for recycled secondary material.

During the IREMCON Conference from March 21st to 22nd, 2018, Peter Heßler, Managing Director of the company URT Umwelt- und Recyclingtechnik ...

URT present during the WRF 2017 in Macao